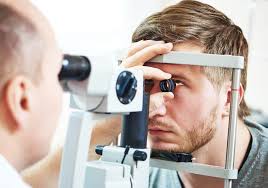 A new implant Known as a “paradigm shift” has restored partial sight to blind people by transmitting images directly to the brain. Thanks to specialists from the Baylor Medical College in Texas and the University of California Los Angeles.

Before now, there have been efforts to use a similar implant to create a “bionic eye,” but non of them have live up to expectations, because majority of them required the patient to have at least a working eye or a working optic nerves, but right now this new invention don't need an eye or optic nerves for it to work effectively.

This time, however, scientists implanted electrodes directly into the visual cortex of the brain, bypassing the eye and optic nerve completely. The patients wear special pairs of glasses that have cameras capable of transmitting video images which get picked up by the electrodes.

So far, six people, who had been completely blind for years, had the implants fitted inside their brains. They were then asked to look at a black computer screen and identify a white square that appeared in random spots, they were able to identify it most of the time.

There is no word yet on if the technology will work on people who were born blind. But however, the invention is magical and full of hopes.