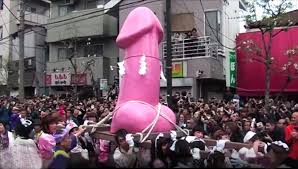 Festivals are celebrations observed by different tribes around the world. Each tribes have their own festivals that has been shaped by their own traditions and customs, which they celebrate either annually, monthly, or every centenary. When we talk about festivals, most people think of Africa and some other parts of Asia, as the only continents that observes it, however, there is no country or tribe around the world that do not have their own festivals even the western world have thousands of it they celebrate.

However, there are some truly bizarre festivals that most countries observe. Some are based on traditional ceremonies, others are based on religious beliefs, and a handful are held in support of a good cause. From hair freezing contest to underwater festivals and the parade of all things phallic, below are some of the most unusual festivals from around the world you need to see.

In February each year, the town of Whitehorse, Yukon, holds the annual International Hair Freezing Competition where participants are invited from allover the world.

The participants soak their hair in a pool of water whose temperature is below 20 degrees, and when they lift it out, the freezing air outside will complete the freezing work for them, like a sculpture made of frozen ice. The winners are usually announced in March.

This look so bizarre, going down the sea bed to perform, what if sharks decides to visit the concerts?

Anyway, having the guts to do things adventurous is always where the fun lies.

In this festival, participants are dressed like fishes and mermaids while they perform underwater. The judges and viewers in the water who are also divers, enjoy the music from the local radio station via underwater speakers. This festival is usually celebrated every July in Miami USA.

This is a festival that attracts both tourist and locals in South Korea. The festival was introduced in the late 1990s to promote a mud-based cosmetic products. During this festival, visitors and locals engage in mud wrestling, mud skiing, mud slides, and they even painting their body with mud.

Wow ! this looks so fun because its going to bring a lot of childhood memories - childhood activities you never had the opportunity to do in a long time.

This is a festival that is made to honor all things phallic. The festival is usually observed every April, during this festival, Prostitutes would come to the Kanamara Shrine to pray for protection against STDs and other sexually related diseases.

It is a festival that also connotes fertility for young married women and it also helps to raise funds for research into HIV. Foods eating during this festival such as hotdogs, lolipops, sausage and fruits, are usually carved inform of phallus since that is what the festival portrays.