Easter Traditions In Some Countries But Not Yet In Africa 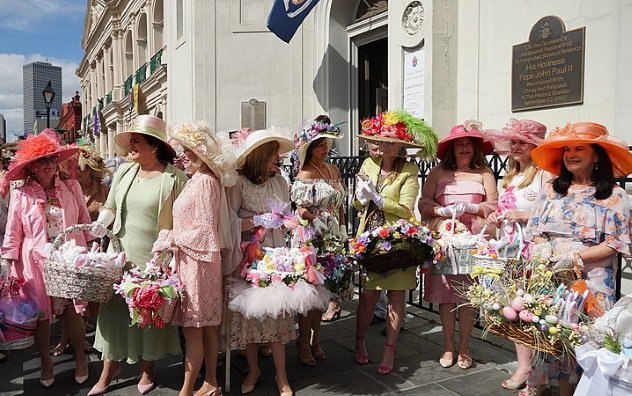 Hungarian Easter traditions are based upon the common theme of rebirth and a celebration of spring. Hand-decorated eggs have given way to the commercial chocolate eggs, which the Easter Bunny will leave for children on Easter Sunday.

However, traditionally, Easter was also a time of symbolic cleansing and, of course, fertility, though it’s hard to imagine how having a bucket of cold water thrown over you could be considered a romantic gesture. On Easter Monday, young men would visit young women to recite a poem to them. Then, somewhat killing the romance of the occasion, they would douse the young women with a bucket of water to ensure that they became good wives and mothers.

To give thanks for their somewhat wet “blessing,” women would then feed the men chocolate treats and a glass of Hungarian palinka. Sprinkling people with perfume has become the preferred means of honoring this tradition today.

Children in France receive their Easter goodies from the “Easter Bells.” The tradition is based on staunch Catholic teachings, where no church bells are to ring between Holy Thursday and Easter Sunday.

Children are told that the bells fly to Rome to be blessed by the pope, and they return on Easter Sunday bringing eggs and other treats. Chocolate treats are enjoyed just like in many other countries in the world, as are traditional Easter egg hunts. However, it is the Easter Bells, not the Easter Bunny, which are responsible for littering the gardens with eggs.

During Easter week, schools and preschools around the world will be hosting the annual Easter hat parade. Children don their cleverly crafted hats adorned with Easter bunnies, eggs, streamers, and flowers. Fashionable women will line up for Easter hat parades wearing their latest millinery designs.

The origins of Easter bonnets stem from the tradition of making a new hat to wear to church on Easter Sunday. Women would celebrate spring, decorating their hats with flowers, lace, and ribbons as a symbol of rebirth and renewal.

However, the concept of the Easter bonnet wasn’t cemented into people’s minds until 1933, with songwriter Irving Berlin’s lyrics to “Easter Parade.” The popular song about women parading along Fifth Avenue in their Easter bonnets featured in musicals and films, and today, the tradition of decorating an Easter hat is a great, fun activity in the lead-up to Easter.

Around the world, Easter bunnies have begun appearing. Children will wake up on Easter Sunday to excitedly discover what chocolate treats the bunny has brought them. This mysterious rabbit is credited with bringing Easter eggs to children in many Western cultures, but the exact origins of the Easter bunny are unclear.

Hares were often included in traditional fertility festivals which occurred across Europe to celebrate spring. They can also be seen in many medieval artworks and religious texts. Leporids are particularly prolific breeders, so they’re a great symbol of fertility and rebirth. It’s therefore not surprising that they were a central theme in many spring festivals.

Hares delivering colored eggs were originally part of German folklore dating back to the 17th century, when a German essayist mentioned the concept of hares bringing Easter eggs. German immigrants brought their traditional Easter Hare with them. This eventually evolved into the modern-day “Easter Bunny,” which served as a popular marketing tool for commercial chocolate Easter eggs during the 19th century.

On Easter Sunday, millions of chocolate eggs will be consumed across the globe. Supermarket shelves are lined with Easter eggs in all shapes, sizes, and varieties. However, these commercial chocolate eggs have only been popular for a relatively short time. In many church traditions, eggs couldn’t be eaten during the week before Easter. As far back as the Middle Ages, eggs were collected and decorated to be eaten after Lenten fasting on Easter Sunday.

During the 19th century, elaborate egg-shaped fabric bags and parcels were made to give gifts of candy and chocolate. Egg-shaped toys were developed to contain gifts for children. During this time, French and German confectioners began crafting egg-shaped chocolates. They were initially solid, made from bitter dark chocolate. It took some time before chocolatiers perfected the art of molding their confectioneries into the hollow eggs which are common today.