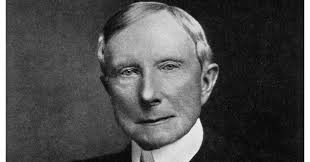 When you look at the wealthiest men alive today,  topping the chart are tech billionaires like Jeff Bezo or Bill Gates. But actually, the wealthiest businessman to have ever lived died almost a century ago. Today, we will be looking at a business empire so vast that even after a hundred years of technological progress, no man has been able to overtake its founder.
This is the history of Standard Oil.
The origins of history's greatest monopoly are actually pretty humble. It all started in 1839 with the birth of John Rockefeller in upstate New York. He was the eldest son of a traveling merchant, who identified himself as a "botanic physician", but in reality was selling the equivalent of homeopathic medicine. He would spend weeks away from home and in fact would have several children with another woman, who he decided to bring back home to his wife so they could all live together. In the very confusing household, John would grow up learning how to hustle people for the best deal possible and how to get the most out of every penny he got. His family would barely stay in  one place for long, and John would live this nomadic lifestyle ever since he was three years old.

To help his mother, John would earn any money he could by raising turkeys or doing work for neighbors. His intelligence was put to use when his family moved to Cleveland, Ohio in 1854, where he got the chance to attend a proper school.But less than a year later, John dropped out in order to work as a bookkeeper at a local produce broker.he would earn $0.50 per day, which obviously wasn't much at the time so he would help other companies on the side.
After two years of working as a bookkeeper, his bosses refused to give him meaningful raise so he decided to one-up them by by starting his own produce brokerage.Thanks to his good reputation he got a loan of $4,000 which at the time was a huge sum of money. John started trading hay, grains and various meats, and in his first year he recorded sales of half a million dollars of which he only got a small fraction of commission, but still it was a huge success. Every bank in Cleveland was begging John to borrow money and he was barely 18 years old.But then in 1859 something happened that would change his life forever. Just a hundred miles east of Cleveland, Then first American oil well has been discovered. This marked the beginning of the Pennsylvania oil rush and within a year, 4500barrels of oil will be produced.
Back then, oil wasn't quite as valuable as it is today; gasoline cars hadn't been invented yet, but oil  could still be processed into kerosene, which would then be used for lamps. John realized however, that the biggest profit to be made weren't in drilling for oil, but in refining it. He witnessed many people going bust before striking oil, so he knew that drilling business was too risky for him.Instead he'd let others go through the hassle of finding oil and he would just  buy it off them.
John had to wait until 1863 for the government to build a rail line connecting the Pennsylvania oil field to Cleveland. When the line was built, John was ready for it with a long line of partners and banks ready to back him up. He also asembled a team of seasoned chemists and engineers, who not only optimized the refining process but also discovered various use of the byproducts of refining petroleum.
You see, the early refineries in Cleveland could only operate at about 60% efficiency but John not only increased that percentage, but he also started selling all the byproducts, like paraffin wax, tar and naphtha. Within two years the Rockefeller refinery was worth over seventy thousand dollars and was among the largest in Cleveland.

John wasn't done: in 1865 there were 26 competing refineries but within 5 years John had acquired all but 4 of them. By this point his business was getting to big to handle as a partnership, so in 1870, he incorporated as Standard Oil of Ohio. To convince few remaining competitors in Cleveland, John would simply invite them over and show them his books, revealing that he could operate at a loss for longer than they could stay solvent. In exchange for a good buyout price, John would offer his competitors positions in his own company, thus placing the brightest minds in the industry under his control.

Of course, not everyone would give up immediately, and over time John eroded the price of oil and kerosene, sometimes by as much as 80%, in order to strangle competitors. Unsurprisingly, his strategy worked: by 1880 he had acquired refineries across the Northeastern  US and was refining over 90% of the entire country's oil production.

At this point, John was so powerful that he would invite the owners of the big rail companies and personally negotiate rebate for using their trains.
This practice of negotiating backroom deals really got the business world riled up. At the time(and still kind of today) most industrial goods were transported by rail, and many big industrialist worried that John's abuse of transportation rebates could result in similar monopolization in their industries.

Over the next decades, businessmen, politicians and media would attack Standard Oil with increasing ferocity. legislators in Ohio began drafting antitrust regulations to bring down Rockefeller, but he was one step ahead. In 1882 he reincorporated in New Jersey, this time creating the Standard Oil Trust which in turn held stakes in over 40 local companies. Then, to showcase his success John built an impressive headquarters for his company on Broadway. This moment was the high point of Rockefeller Standard Oil: he owned 20,000 oil wells, 4000 miles of pipeline and employed over 100,000 people. But his grip on the oil industry was loosening both domestically and abroad.

Massive oil deposits has been discovered Russia and Asia, and were being developed by the Rothschild family, which spared no effort in getting that oil to America.Worse yet, in 1890 the federal government passes the Sherman Antitrust Act, which finally gave politician the teeth to go after the Standard Oil Trust itself.

The complex legal structure behind all the companies was very difficult to investigate, which is why the government couldn't actually break up Standard Oil until 1911. By that point, however, John Rockefeller had already cashed in and was no longer actively managing the company.

In the final 20 years of his company's existence, it had paid over half a billion dollars in dividends. By some estimates, the true worth of Standard Oil at its peak was $1trillion, so the breakup really didn't come as a surprise to most people.

In 1911, the Supreme Court found Standard Oil guilty of anti competitive practices and broke the company up into 34 separate entities. John Rockefeller kept his stake in those companies until his death and in fact it turns out that the breakup was the most profitable event in his life.You see, over the time many of those companies merged back with one another.

Today, most of the Standard Oil remnants are part of either Exxon Mobile, Chevron or BP,which have since become incredibly large companies in their own right. Jon Rockefeller's ownership of these successor companies made him the richest business man to have ever lived, with an estimated net worth of $400 billion.

Till date, no one has beaten Rockefeller in the leader board; not even Jeff Bezos himself seems likely to archive that.