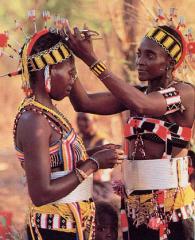 African societies are known for marking the different transitions of a person's life cycle with different ritual or rites of passage. These rites of passages are quite unique and interesting to know, and they are a crucial aspect of the culture of Africans. Obiaks Blog shares 4 unique African rites of passage.
Childhood
Children are considered an important part of African societies because they are seen as the custodians of the traditions of the people. Because of the high child mortality in some African societies, these societies really go all out to celebrate the arrival of their children as a way to protect them from the 'evil spirits' they believe are responsible for the deaths. In Namibia for example, the Himba people never leave a newborn child on his/her own and they also hardly put the child down for fear that it might be stolen by evil and malicious spirits. The Wodaabe people of Niger, also avoid naming their newborns until the 12th birthday of that child to avoid the child being identified by the spirit of death.
Circumcision
In some African societies, it is believed that a child is initiated into adulthood through a circumcision ritual. It is this belief that made female circumcision popular in quite a number of African societies, but it has since been criminalized by the government of these societies or countries. Though some tribes still practice female genital mutilation, they do so in less harmful ways. For boys however, circumcision is still ongoing and more unanimous across the continent, though different African societies celebrate this rite of passage differently. The removal of the foreskin of the boy is often done by the village elders who use the ritual as an opportunity to pass down key traditions to the younger generations.
Marriage
In Africa, marriage is quite an important rite of passage that many communities consider an 'invaluable spiritual experience'. Fortunately or unfortunately, westernization has eroded or heavily modified majority of African traditional marriage practices but there are a handful of communities that still practice them to the letter. For example, the Surma people of Ethiopia usually arrange their marriages after a stick fighting contest in which young men thrash each other quite mercilessly with sticks to prove their readiness to become husbands. This tradition is quite similar to the Sharo tradition of the Fulani people, where a groom must endure flogging and beating and not wince or show pain to be considered eligible for marriage.
Death
Death is viewed differently across African societies. There are some societies that believe that death is the end of a person's journey through life, there others that believe that death signals a continuation of life into another world (a spiritual world) and there are some that believe that those who have passed on are just resting. Again, there are some communities that believe the spirits of the dead are watching over them. The varying beliefs about death makes African communities or societies have different ways of handling their deceased. There are some communities within the Yoruba people of Nigeria that believe in burying the dead with a horde of items for them to use in the afterlife, and there are even some communities that go as far as burying the dead with a living servant, so the servant can assist the person in the afterlife. This 'privilege' is however mainly reserved for kings. Also, in South Africa, some communities perform special rituals at the deceased person's home before the burial.
Leave a comment...