EFFECTIVE WAYS TO GET A LAZY PERSON TO WORK 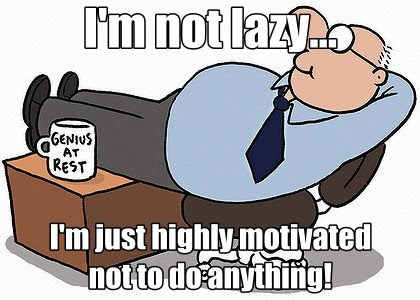 There are ways to get lazy people to work and it just might be a bit easier than you've imagined.
Consider the 'Lazy' Person
Certain people you consider lazy might not see themselves as lazy. In their own eyes, they're putting in as much effort as they can. People have different perspectives on what can be defined as laziness and they tend to do what's in alignment to their goals and view of the world. Ultimately to change people, you have to try to understand them better and first understand their perspectives. You can do this by asking the person non-judgmental questions or talking to others who know the person to get a better picture of his/her personality.
Consider Your Perspective
You have to understand and learn to accept that the fact that another person doesn't have the same approach to work as yours doesn't make them lazy. You should try to understand that while your perspective on laziness makes much sense to you, it might not make sense to the other person (as much as this other person's perspective on laziness doesn't make sense to you too).
Let Go of Your Preconceived Notions
This basically involves being more understanding and being more flexible with your beliefs and notions on work and laziness. Ultimately, everyone is willing to work hard for things that truly matter to them, so lose your judgments and preconceived notions, and focus on influencing the other person to work based on his/her perspectives.
Tap Into Their Deepest Motivations
To effectively influence people, you have to learn to tap into their deepest motivations. When you give a person a good enough reason or a big enough motivation (based on their deepest motivations) to work and accomplish tasks, you would be surprised at how much they would work to accomplish just about anything you give to them.
Focus on Results Not Activity
Avoid obsessing on how active a person. Focus instead on if the person is achieving the desired results. As long as the person is achieving results, don't fret so much about how many hours the person works or how diligent they appear to be. The better measure for work is results, rather than time spent.
Leave a comment...