Tonto Dike Is A Drunk And Very Violent.Watch The Video as released by the Ghanaian Police 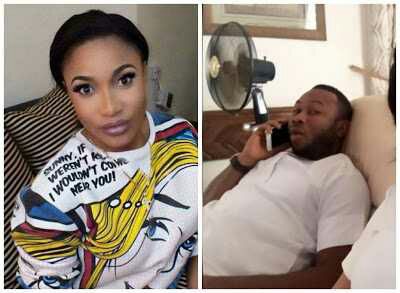 Information hitting the internet as a follow up  on the crisis bedeviling the marriage of Nollywood Top Star Tonto Dike as painted her of being a drunk and a super violent person and that she deserved all the crises that have confronted the marriage.

In a video clip released by Ghanaian police it was disclosed that heavily drunk Tonto during a heated argument with the husband went violent with her husband, Dr Olakunle Churchill and which left Churchill's guard wounded.

Ghanaian polices is reported  to have received a distressed call by the residents of Trassco estate where the husband resides in Ghana and before they got there, Tonto had destroyed  property worth more than $15000 and was even waving a gun at another bodyguard ,who was trying to stop her from destroying more property. She allegedly brought petrol to even burn down the house.

Ghanaian police also reveal in the video that Tonto was asked why she was going violent and her reason was that her husband was cheating on her.

This video was released by Asempa News in Ghana which shows a crime officer  Supt.Joseph Oppong of the Madina Divisional Police, Ghana reading a Statement  allegedly written by Churchill during one of their rows in Ghana.

Watch the video below