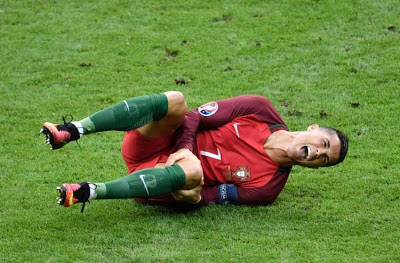 Portugal and Real Madrid Superstar Cristiano Ronaldo will be out injured for 4-5 months according to reports coming out from Spain and Madrid.

The striker had to be stretchered off the field after colliding with France player Dimitri Payet and had to watch his teammates win EURO 2016 in extra-time without him.

According to top Spanish media, Managing Madrid, the Real Madrid forward has suffered a partly torn ACL. The initial medical reports by doctors in France estimate that he could be sidelined for four or five months.

If this report turns out to be true then he'll miss the UEFA Super Cup clash with Sevilla on August 9th. He'll miss a large chunk of the La Liga season as well as the group matches of Madrid's Champions League defence.
Leave a comment...