Photos: Babysitter arrested after inflicting injuries on a baby boy 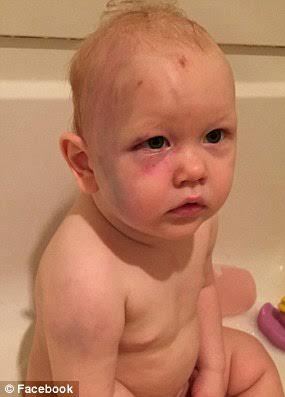 A 27-year-old male babysitter has been accused of abusing a one-year-old boy named Jacob. Markell Hilaire is facing charges of criminal mistreatment and assault for an incident the parents of the boy, Joshua Marbury and Alicia Quinney claimed he's responsible for.

According to the couple, they returned home in March to find their son screaming and the babysitter - (who was a friend to the father of the boy) fast asleep. Jacob was covered in bruises with one shaped like a hand print on his face.

They reported the incident to police the next morning but two months later, no criminal charges was filed and they felt the authorities had let them down.

Jacob's father then took to Facebook to vent about what he believed to be a previous court ruling stopping his son's alleged abuser from being charged - a 2012 ruling in the Oregon Court of Appeals which prosecutors say make it harder to file charges in cases of abuse where the victims can't speak.

The father then posted pictures of Jacob in the bath with extensive bruising on his face and thousands of people shared the heartbreaking photos across social media.

Although his bruises have now healed, his mum says the incident has changed her son and she is terrified of leaving him alone with anyone.

People demanded for action to be taken by authorities and this led to him being arrested and charged to court. Hilaire remains in the Washington County Jail with bail set at $10,000
Leave a comment...