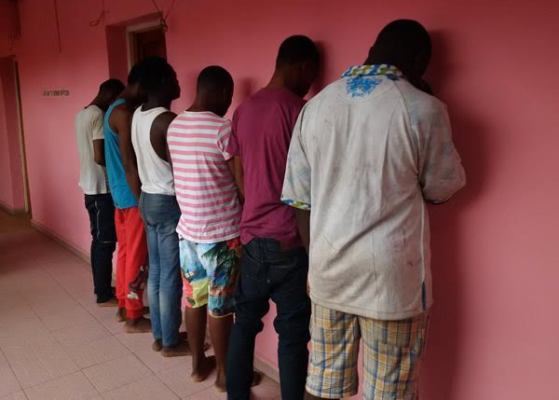 Six young men accused of being homosexuals have been arrested by the Edo state police command. According to the Nation, the young men whose names were given as Festus Osagiede (24), Hyacinth Imahanrebhor (20), Itama Omon (25), Onwukwe Prince (28), Monye Chukwuma (23) and Osadebe KelvinĒé (26), were paraded by the Assistant Inspector General of Police in charge of Zone 5, AIG Musa Daura at the state police command headquarters in Benin city today May 12th.

According to Daura, the suspected homosexuals were arrested in different parts of the state. The AIG said leader of the homosexuals, Festus Osagiede, lured one of the suspects, Itama Omon into the act after attending a night club in 2006.

ďAfter the third suspect (Itama) got drunk, Festus Osagiede invited him to his house and forcefully had carnal knowledge of him. Since then, they have been committing the crime with others at large until May, 2016, when luck ran out of them and they were swooped on by zonal detectives.ĒĚhe said

All of them are presently being detained by the police and would soon be charged to court.